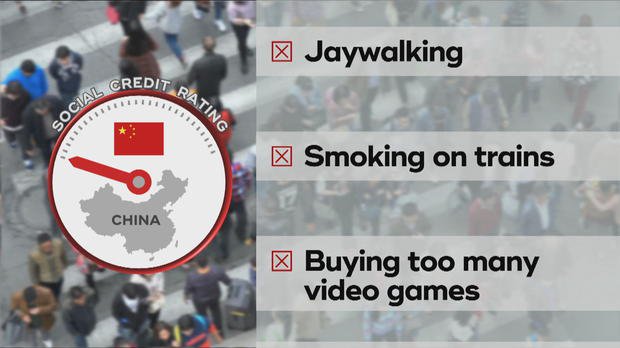 Liu Hu is a journalist who recently attempted to book a flight because the government had banned him from flying. They deemed him untrustworthy after his court-ordered apology surrounding several tweets were considered insincere.

Liu said he’s not able to buy property or send his child to a private school. He said the list controls everything a person does or can do.

The list is getting even longer with all Chinese citizens getting a social credit score, which fluctuates based on behaviors from community service to purchasing products made in China to smoking in non-smoking areas, tax evasion and fraud.

China’s move is based on the ever-increasing network of surveillance cameras, which can recognize over 4,000 vehicles.

Sensetime CEO Xu Li said the government wanted smart cameras to catch criminals but now it can be used to watch the average citizen. He said the cameras know when someone is male or female, adult or child.

Ken Dewoskin has been watching the country’s political and economic cultures for more than 30 years and is concerned that the new scoring system could be problematic if the government abuses it. He also said nobody really knows how the scoring system works because it’s a closely guarded secret.

According to Dewoskin, he said the idea might be to determine how to allocate benefits but it could be used to dedicate people’s behavior.

Many are concerned the government will use the data to hinder people in opposition of the communist party. Plus, with no due process, clearing one’s name is next to impossible.