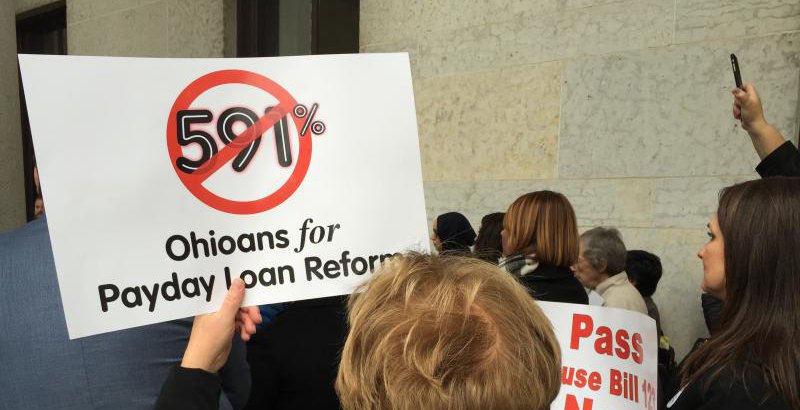 With very little changes made to the payday lending bill, the Ohio State Senate approved the bill. It now goes back to the House of Representatives. The Senate’s latest changes, however, include increasing the maximum loan amount to $1,000 or seven percent of a borrower’s monthly income and limited the fees to 60 percent of the initial loan.

For more than a year, the bill was in the House Government Accountability and Oversight Committee after Rep. Cliff Rosenberger resigned after an FBI investigation into his possible involvement with the lobbyists with payday loan lenders.

There have been no federal or state attempts to wrangle in the high-interest rates these lenders give borrowers, which have left many Ohio borrowers from seeing financial freedom.

Ohio residents, in 2008, approved the Short-Term Loan Act that capped the lenders’ yearly percentage rates at 28 percent and extended the time a person could repay the loan to 31 days. However, despite the law passing, the lenders were able to circumvent them, trying to get as much money from state residents as it could.

The Consumer Financial Protection Bureau, in 2016, introduced guidelines that raised the amount of time people could use to repay their loans and allow them to make installments rather than large-lump sums.

Information from Pew Charitable Trust showed Ohio residents are hit with payday loans with an interest rate of 591 percent – the highest in the nation. Borrowers also need to give lenders 34 percent of every paycheck to pay the loan off.

In Feb. 2018 Ohio Poverty Report shows the state has the highest poverty rate in the nation.

According to CashMax founder Cheney Pruitt, passing House Bill 123 would be the death of the payday loan business.

This is true, but if it doesn’t pass, it means Ohio residents will be stuck with very high-interest rates.